I heard an interesting story today on my way to pick up my husband from work. It was about a church that has started an online church. My question is, "How biblical is this?" Seriously, I know that we are to gather to learn more about the Bible, but what about the fellowship of believers. I have the same problem with TV church. Granted, these are great tools to reach people who wouldn't enter a church building, but where does it end? More and more of the kids I grew up with no longer find solace inside the church. Aren't we supposed to 'not forsake the assembling of ourselves'?
Posted by Daylyn and Jonathan at 9:42 PM 2 comments:

X-Men III and My Adventurous Side 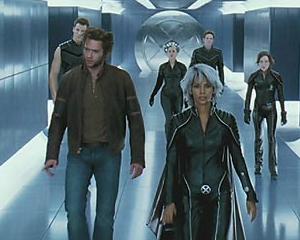 We went to X-Men III and it was fab! Normally, this isn't my type of movie, but I loved the first two in the series that I can only imagine that I will like this one equally or more. This strays from my love of classic movies and love (girly) movies (Much Ado About Nothing, being one of my favorites). I imagine that part of me longs for action and adventure. I have been known to enjoy heights and roller coasters. My older sister does not share in my love for roller coasters, much to my amusement at times. For some reason, this sense of adventure has waned as I have gained full time employment and grown-up responsibilities. Or, maybe I want to see X-Men because Hugh Jackman is in it....
Posted by Daylyn and Jonathan at 9:37 PM 2 comments:

I think my arms are falling off. Literally, they are about to pop out of socket at the shoulder. We have been shifting files this week at work. It sounds like not such a big deal, but trust me, it is. I am developing these man muscles on my arms and will soon been on the pro arm wrestling circuit. We hope to be done tomorrow....so hopefully no more sore muscles. Good thing too, I am starting to scare Jonathan with my guns. I'm looking forward to the long weekend and a trip to San Antonio......
Posted by Daylyn and Jonathan at 5:02 PM 1 comment: 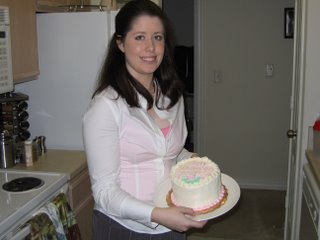 TV seasons are coming to an end. The school year is coming to an end. I was taking a look back through some of the pictures on our computer and came across this picture of me in our old apartment in our first year of marriage. It is crazy to think that we have been married this long, it seems like we were just dating yesterday. I cherish every moment. Look how long my hair was! I got it chopped off and can't wait for it to grow back. I think that my favorite blogs are ones with pictures. They just seem so empty without pics. Wish I could have some of that cake right about now!
Posted by Daylyn and Jonathan at 10:28 PM 2 comments:

I would just like to say Happy Mother's Day. Especially to my mom, who has been there for me in ways no one else could. And, to my grandmothers, including Momo, who have been great examples of God's grace and godly wisdom. My mother-in-law has welcomed me into the family with open arms. If it weren't for wonderful mothers, where would we be?
Posted by Daylyn and Jonathan at 7:59 PM No comments: 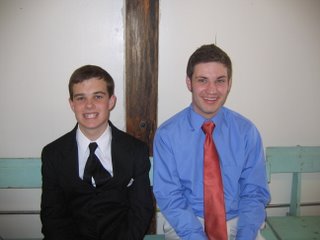 My cousins, Jamie and Charlie 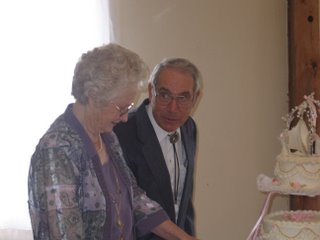 My Grandpa and Grandma at their 50th! 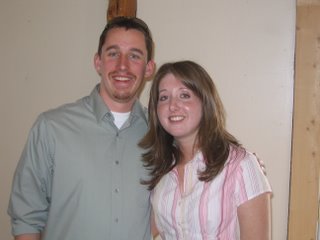 My sista and her boy 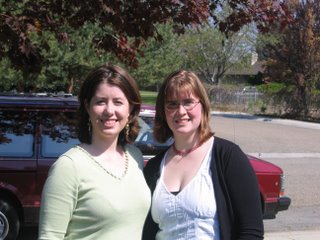 Becca and me!
Posted by Daylyn and Jonathan at 9:45 PM 1 comment:

Sorry for the long stretch of no posts. We were in Idaho for the past week! I will post pictures soon of our trip. We were celebrating my grandparents' 50th wedding anniversary. There were many people celebrating with us, upwards to 250 guests. Look for pictures tomorrow!
Posted by Daylyn and Jonathan at 7:55 PM 1 comment:

The concert on Friday was fantastic! We were probably some of the oldest people there, which was a little weird. The first act was a newcomer, Josh Hoge. He only performed a few songs, but I liked what I heard. He was able to give away a few sample CD's of three of his songs. We have been listening to it and think that he could really have some hits. The only complaint I had about his performance was his gestures. He was a little distracting with his 'spirit fingers'. I think that his on stage character will improve with time and experience.
Next, Mat Kearney performed, but with only one other accompanist. It was a nice change from the loud band. Jon and I have been listening to his music this year and really enjoyed hearing the songs we knew. His little rap sequences were very original and he even made up lines about Austin. The crowd was enraptured with his music.
We didn't stay for Matt Wertz, but he did help out a couple times with the other musicians. For all my friends in Boise, look for Mat Kearney to be there next week. Please give these up and coming artists your attention and support for their awesome talents.
Posted by Daylyn and Jonathan at 8:53 PM No comments:

Daylyn and Jonathan
My main goal is to display Christ in my life. I love to have fun and spend time with my wonderful husband, Jonathan.